“Call Me,” by Dani Ripper and John Locke

In this first book of a brand new series by Dani Ripper and New York Times Best Selling author, John Locke, a young, beautiful private detective is determined to find the infamous killer, ManChild. To support herself while searching, our plucky detective works as a decoy, helping jealous wives and fiancés determine if their men are likely to cheat.

“I’ve read Call Me three times. Need I say more? How about this: Five Stars!”

“Five Smiling Stars for Call Me! –An electrifying mystery-thriller with all the twists, turns, and good-hearted humor Locke’s fans have come to expect from his Donovan Creed and Emmett Love novels.”

“Call Me is full of heart and humor, and destined to become a hit TV series! I can’t think of a better way to spend an afternoon than to read this exceptional novel. You’re going to love these wonderful characters. Escapism at its best! Five Big Stars!”

“The Little Girl Who Got Away,” by Dani Ripper

(SHOULD THIS BOOK BE RELEASED? VOTE HERE NOW!)

Colin Tyler Hicks didn’t have to work hard to capture 15-year-old Mindy Renee Whittaker and imprison her in the basement of his secluded farm house. But dealing with his manipulative young prisoner proves to be a formidable challenge for the creepy, schizophrenic killer-rapist. One of his personalities requires Mindy’s death, the other requires her love.  The Little Girl Who Got Away is the story of what happens when the smart, plucky, resourceful Mindy refuses to become a sad statistic on a police report, and instead wages a life-or-death struggle against the powerful, psychotic killer-rapist, using only her wits and charm as weapons. 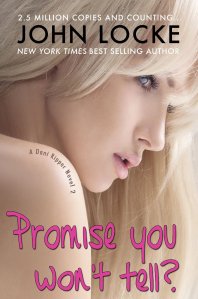 “I think something might have happened to me Saturday night. Something bad.”

Private Investigator Dani Ripper’s client list is nuttier than the Looney Tunes conga line, but she diligently solves one crazy case after another, waiting for a game-changer.

Saturday afternoon Riley quietly placed a little strawberry sticker on her private area and pretended it was a tattoo. She didn’t tell anyone about it. That night she went to a slumber party that featured drinking and boys. Riley fell asleep, woke up the next day with no reason to think anything happened…

…Until Monday, at school, when a classmate called her Strawberry.

Coincidence or crime? Dani agrees to investigate. And the roller coaster ride begins.

Beth Conroy: young, beautiful, Tennessee Teacher of the Year—is shocked to learn she’s been accused of sexual misconduct with a student. Facing a scandal of epic proportions, Palmer School retains private investigator Dani Ripper to sort out the truth and protect their interests. The accuser’s mother gives Dani until noon tomorrow to show proof the charges are false, or she’ll call a city-wide press conference to level charges. As Dani begins her investigation she finds herself drawn to Beth, even as the evidence against her is mounting faster than Viagra test rabbits.

I always finish John Locke’s books the same day I start them. He has a way of sucking you in. This novel was no different.

In another author’s hands, the seriousness of the subject would result in a dramatic, heavy-handed morality piece drenched in political correctness. But John seems to have mastered the art of tackling serious, topical subjects with laugh-out-loud humor, in-your-face energy, and razor-sharp dialogue.

Presley French is young, beautiful, and someone wants her dead.

Someone else—her former English teacher—wants to physically assault her.

Someone else—the FBI—wants to interrogate her as a possible terrorist suspect.

Someone else—Dani Ripper—wants to protect her, but can’t decide if Presley is insane, or just crazy.

With nowhere left to turn, Dani contacts someone else—Donovan Creed—who refuses to get involved unless Dani agrees to owe him an Ultimate Favor.