I snapped at my daughter twice last week. That’s never happened before.

It shocked us both.

“What’s your problem?” she said.

An hour ago I’m in Target, watching her buy furnishings for her college dorm room. The one she’s moving into on Sunday. As I watch her walking up and down the aisles, making careful, deliberate choices, it’s suddenly November, 1996. She’s two years old. We get up early, watch Barney’s Imagination Island. When it ends, I say, “Today’s a special day.”

I look around, lower my voice. “Every four years while the kids are in school, the parents sneak out and vote for the next president.”

“That’s the person in charge of the whole United States.”

“Are you gonna vote?” she says.

“I know who you’re gonna vote for!” she says.

I blink and it’s 1998. She’s three. Every Thursday I pick her up from school and we do something fun all afternoon. Typically, she wants me to play dolls with her, and I’m glad to, since I have a thousand stories in my head, and love to crack her up with the crazy things I make the dolls say. When she laughs, her whole body shakes. She says I should write a book so other people can laugh. I tell her I’ll think about it.

I blink again and it’s January, 1999. She’s four, and we’re in the Magic Kingdom. Tomorrow we’ll cheer her mom as she runs the Disney Marathon.

“What would you like to do first?” I say.

“Can we do anything I want?”

“Can we play dolls?”

“Wait. You want to play dolls?”

“Here, in the middle of Tomorrow Land?”

She’d rather play dolls with me than ride the rides at Disney World! I’m fully aware I’m in the middle of what will become one of the highlights of my life. We sit on a concrete wall beneath the Wedway People Mover and play dolls. A small crowd gathers to watch us. Life is sweet and good.

I blink my eyes and it’s Christmas, 2005. She’s eleven, putting on a play with her six-year-old brother. They’re singing “When Christmas Comes to Town.” I watch, crying quietly, like a crazy person.

I snapped at her twice last week, and didn’t know why.

She’s moving out, going off to college.

In my head it makes sense. She’s a young lady. It’s her job to grow up. I’m a parent. It’s my job to let her. But I’m in pain. Already missing her, and all those special moments we shared through the years. I’ve always had them in my heart, it’s just that now I realize those special moments are the fabric of our lives.

Everyone says she’ll only be two hours away, but that misses the point. Things are different now. She’s become part of the world. She’ll be fine, and we’ll be fine. One day I’ll blink and she’ll be married, and I’ll be playing dolls with my granddaughter. It’s all good. Just, you know, different.

I did try my hand at writing. In fact, I’ve got a new book out. It’s called Box, and just as my daughter advised, I wrote it to make people laugh.

My book and my daughter are going out into the world this week, but there’s a big difference. My book is going to make you laugh. But my daughter’s going to change the world. 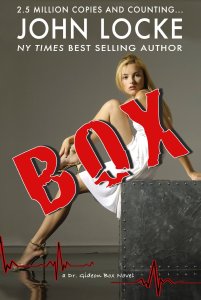